In Class 10 Science Chapter 4: Carbon and its Compounds (NCERT, SEBA, NBSE, TBSE etc.) you will learn about the element carbon and its various compounds. You will study the properties and importance of carbon, as well as its role in the formation of both inorganic and organic compounds. Get here the questions, answers, textbook solutions, PDF of the chapter.

1. What would be the electron dot structure of carbon dioxide which has the formula CO2?

1. How many structural isomers can you draw for pentane?

2. What are the two properties of carbon which lead to the huge number of carbon compounds we see around us?

3. What will be the formula and electron dot structure of cyclopentane? 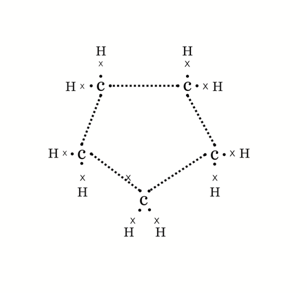 4. Draw the structures for the following compounds. 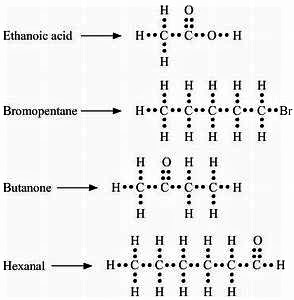 There are many structural isomers possible for bromopentane. Among them, the structures of three isomers are given.

5. How would you name the following compounds?

1. Why is the conversion of ethanol to ethanoic acid an oxidation reaction?

Answer: The conversion of ethanol to ethanoic acid is an oxidation reaction because it involves the addition of oxygen to the ethanol molecule.

2. A mixture of oxygen and ethyne is burnt for welding. Why is a mixture of ethyne and air not used?

Answer: When ethyne is burnt in air, it gives a sooty flame due to incomplete combustion caused by a limited supply of air. However, if ethyne is burnt with oxygen, it gives a clean flame with a temperature of 3000°C due to complete combustion. This oxy-acetylene flame is used for welding. It is not possible to attain such a high temperature without mixing oxygen with the ethyne, which is why a mixture of ethyne and air is not used.

1. How would you distinguish experimentally between an alcohol and a carboxylic acid?

2. What are oxidizing agents?

Answer: Oxidizing agents are substances that gain electrons in redox reactions and have their oxidation numbers reduced.

1. Is it possible to check if water is hard by using a detergent?

Answer: It is not possible to determine the hardness of water by using a detergent, as detergent will produce lather with both hard and soft water, while soap only produces lather with soft water.

2. People use a variety of methods to wash clothes, such as beating them on a stone or paddle, scrubbing with a brush, or agitating them in a washing machine. Why is agitation necessary to get clean clothes?

Answer: Agitation is necessary to remove the micelles, or clusters of soap molecules that attach to grease or dirt particles, from the clothes. Soap molecules have both hydrophobic and hydrophilic parts, and they form micelles when they attach to dirt or grease. These micelles remain suspended as colloids, and they must be agitated in order to be removed from the clothes.

1. Ethane, with the molecular formula C2H6 has

2. Butanone is a four-carbon compound with the functional group

3. While cooking, if the bottom of the vessel is getting blackened on the outside, it means that

Answer: (b) the fuel is not burning completely.

4. Explain the nature of the covalent bond using the bond formation in CH3Cl.

Answer: The structure of CH3Cl is given below: 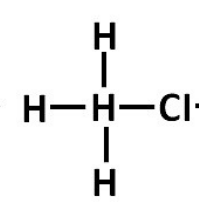 5. Draw the electron dot structures for

6. What is a homologous series? Explain with an example.

Answer: A homologous series is a series of carbon compounds that have different numbers of carbon atoms but contain the same functional group. An example of this is the alkane homologous series, which includes methane, ethane, propane, butane, and so on. The general formula for this series is CnH2n+2, and there is a difference of -CH2 unit between each successive compound.

7. How can ethanol and ethanoic acid be differentiated on the basis of their physical and chemical properties?

8. Why does micelle formation occur when soap is added to water? Will micelles be formed in other solvents such as ethanol?

Answer: When soap is dissolved in water and clothes are placed in the soapy solution, soap molecules form a structure called a micelle. The hydrophobic ends of the soap molecules surround a particle of grease to form a spherical micelle, with the hydrophilic ends on the outside of the sphere and the hydrophobic ends towards the center. Micelles will not be formed in solvents such as ethanol because ethanol is not as polar as soap.

9. Why are carbon and its compounds used as fuels for most applications?

Answer: Carbon and its compounds are used as fuels for most applications because they release a large amount of heat upon combustion due to their high percentage of carbon and hydrogen. Carbon compounds used as fuel have an optimum ignition temperature, high calorific values, and are easy to handle, and their combustion can be controlled.

10. Explain the formation of scum when hard water is treated with soap.

Answer: Hard water often contains calcium and magnesium salts, and when soap is added to it, the soap molecules react with these salts to form a precipitate. This precipitate floats as an off-white layer on the water, known as scum. The formation of scum interferes with the cleansing properties of soap in hard water.

The process involved in this is addition reaction (hydrogenation). It is defined as the addition of hydrogen atoms in carbon atoms of an organic compound.

13. Both soap and detergent are some type of salts. What is the difference between them? Describe in brief the cleansing action of soap. Why do soaps not form lather in hard water? List two problems that arise due to the use of detergents instead of soaps.

Answer: Soap molecules are sodium or potassium salts of long-chain carboxylic acids whereas detergent molecules are ammonium or sulphonate salts of long-chain carboxylic acids. Cleansing action of soaps: The dirt present on clothes is organic in nature and is insoluble in water. Therefore, it cannot be removed by only washing with water. When soap is dissolved in water, its hydrophobic ends attach themselves to the dirt and remove it from the cloth. Then, the molecules of soap arrange themselves in micelle formation and trap the dirt at the centre of the cluster. These micelles remain suspended in the water and, thus, the dust particles are easily rinsed away by water. Soaps do not form lather in hard water because soap molecules react with calcium and magnesium ions present in hard water to form insoluble substance, called scuum which remains after washing in water. Problems that arise due to the use of detergents instead of soaps are as follows: a) Being non-biodegradable in nature, they get accumulated in the environment and cause soil and water pollution. b) Their entry into the food chain leads to bio-accumulation in living beings and causes several health issues.

14. Give a name of the reaction which takes place between ethanoic acid and ethanol in presence of concentrated sulphuric acid. Write the chemical reaction and name of the product obtained.

Answer: The reaction is called Esterification. The name of the product obtained from this is ester. Esters are sweet smelling substances used in making perfumes and a flavouring agents. The chemical reaction is as follows:

(a) Name the compounds A, B and C.
(b) Write the chemical equation for the conversion of A to B and name the type of reaction.

(b) The chemical equation for the conversion of A to B is an addition or hydrogenation reaction and is represented as: C2H4 + H2 —–(ni/pd)—–> C2H6.

16. What change will you observe if you test soap with litmus paper (red and blue)?

Answer: Since soap is basic in nature, it will turn red litmus blue. However, the color of blue litmus will remain blue.

17. What is hydrogenation? What is its industrial application?

Answer: C3H6 and C2H2 undergo addition reactions as they are unsaturated hydrocarbons.

19. Give a test that can be used to differentiate chemically between butter and cooking oil.

20. Explain the mechanism of the cleaning action of soaps.

Answer: Most dirt is oily in nature and oil does not dissolve in water. The molecules of soap are sodium or potassium salts of long-chain carboxylic acids. The ionic-end of soap interacts with water while the carbon chain interacts with oil. The soap molecules, thus form structures called micelles where one end of the molecules is towards the oil droplet while the ionic-end faces outside. This forms an emulsion in water. The soap micelle thus helps in pulling out the dirt in water and we can wash our clothes clean. 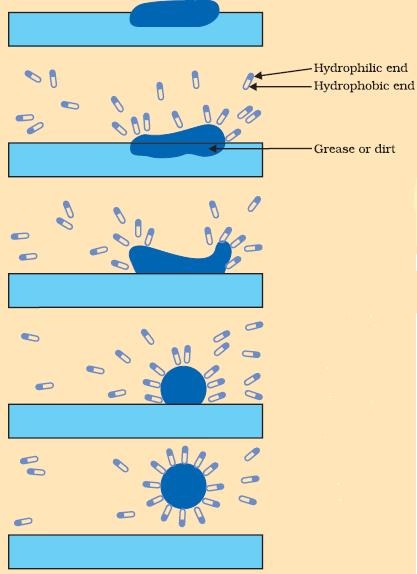 1. When ethanol reacts with sodium and forms two products. These are:

2. The class of organic compounds which gives effervescence with NaHCO3 solution is:

4. Alcohols may be represented by the general formula:

5. Pentane has the molecular formula C5H12. It has: