1. What is the importance of DNA copying in reproduction?

Answer: DNA copying is important in reproduction because it allows an organism to produce offspring that are genetically similar to itself.

2. Why is variation beneficial to the species but not necessarily for the individual?

Answer: Because it enables some individuals to have traits that are better suited to their living environment, variation can be advantageous to a species as a whole. Therefore, some individuals with variations that allow them to better adapt to the new conditions may have a better chance of survival if the environmental conditions change dramatically.

1. How does binary fission differ from multiple fission?

2. How will an organism be benefited if it reproduces through spores?

Answer: An organism that reproduces through spores can benefit in several ways, including:

3. Can you think of reasons why more complex organisms cannot give rise to new individuals through regeneration?

Answer: There are several reasons why more complex organisms may not be able to give rise to new individuals through regeneration:

4. Why is vegetative propagation practised for growing some types of plants?

Answer: Revised: Vegetative propagation is a useful method for growing certain types of plants for the following reasons:

5. Why is DNA copying an essential part of the process of reproduction?

Answer: Because it enables the genetic information to be passed from parents to their offspring, DNA copying is an essential component of reproduction. It is crucial in determining a person’s physical characteristics. Through chemical processes, cells make a copy of their DNA during reproduction, creating two copies of DNA.

1. How is the process of pollination different from fertilization?

Answer: The process of pollination involves moving pollen from a plant’s anther to stigma, frequently with the aid of pollinators like wind, water, birds, or insects. The fusion of male and female gametes during fertilisation, on the other hand, takes place inside the ovule and results in the creation of a zygote.

2. What is the role of the seminal vesicles and the prostate gland?

Answer: Fluids that lubricate sperm and act as a fluid medium for their transportation are secreted by the prostate gland and seminal vesicles, respectively. To feed the sperm, these glands also create nutrients like fructose, calcium, and enzymes.

3. What are the changes seen in girls at the time of puberty?

Answer: Girls going through puberty may notice the following physical changes: enlarged breasts, darkened skin around the nipples, hair growth in genital and other areas like the underarms, face, hands, and legs, onset of menstruation, enlarged uterus and ovaries, and increased oil secretion from the skin that can cause acne.

4. How does the embryo get nourishment inside the mother’s body?

Answer: Following fertilisation, the uterine lining thickens and becomes richly blooded to support the developing embryo. Through a unique tissue known as the placenta, the embryo is fed by the mother’s blood.

5. If a woman is using a copper-T, will it help in protecting her from sexually transmitted diseases?

Answer: No, a copper-T will not protect a woman from sexually transmitted diseases because it does not prevent the exchange of body fluids that can transmit infections.

2. Which of the following is not a part of the female reproductive system in human beings?

5. What are the functions performed by the testis in human beings?

Answer: The testes perform several important functions in human beings, including: producing sperms, which contain the haploid set of chromosomes from the father; and producing the hormone testosterone, which brings about secondary sexual characteristics in boys.

6. Why does menstruation occur?

Answer: Menstruation occurs in females as part of the menstrual cycle, which is the process by which the uterus prepares for pregnancy each month. If pregnancy does not occur, the inner lining of the uterus breaks down and is released from the body through the vagina as blood and tissue.

7. Draw a labelled diagram of the longitudinal section of a flower. 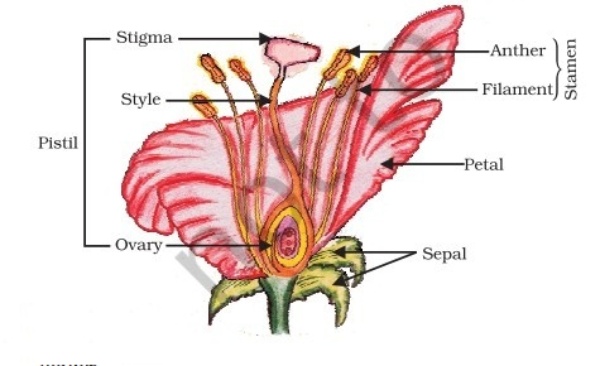 8. What are the different methods of contraception?

Answer: Contraception refers to methods used to prevent pregnancy. Some common types of contraception include:

9. How are the modes for reproduction different in unicellular and multicellular organisms?

10. Leaves of Bryophyllum fallen on the ground produce new plants. Why?

Answer: The leaves of Bryophyllum contain leaf buds that develop adventitious roots. When these leaves fall to the ground and come into contact with soil, the plant can grow from the leaf buds. In contrast, rose leaves do not have leaf buds and can only grow through a method called grafting. This is why their leaves do not give rise to new plants.

11. Why are the testes located outside the abdominal cavity? Mention the endocrine and exocrine function of testes.

12. (a) What are sexually transmitted diseases? Name any one which is caused by bacteria and one caused by viral infection.

(b) Mention any two methods to avoid such diseases.

Answer: (a) Sexually transmitted diseases (STDs) are diseases that can be transmitted through sexual contact with an infected person. One STD caused by bacteria is gonorrhea, and one caused by a viral infection is warts.

(b) Two methods to avoid STDs are:
i. Using a condom to cover the genital area during sexual activity.
ii. Avoiding sexual contact with people who have an STD.

13. How does vegetative propagation occur in nature? Explain with four different examples.

14. Can we find variations in an asexually reproducing organism like bacteria? Write yes or no and give a reason in support of your answer.

Answer: No, variations cannot be found in asexually reproducing organisms such as bacteria. This is because these organisms only have a single parent and do not involve the formation and fusion of gametes (called syngamy). As a result, the offspring of bacterial cells are exact copies of their parent and are identical to each other (clones).

15. How does reproduction help in providing stability to populations of species?

Answer: Reproduction helps to maintain the stability of populations of species by producing new individuals at a rate that is equal to the rate of death in the population. This helps to ensure that the population remains at a stable size.

16. What could be the reasons for adopting contraceptive methods?

Answer: There are several reasons why people may choose to use contraceptive methods, including preventing unwanted pregnancies, controlling population growth or birth rates, and preventing the transmission of sexually transmitted diseases.

1. Reproduction is essential for living organisms in order to:

2. During adolescence, several changes occur in the human body. Mark one change associated with sexual maturation in boys:

Answer: a) c) cracking of voice

3. In Rhizopus, tubular thread- like structures bearing sporangia at their tips are called:

4. The ability of a cell to divide into several cells during reproduction in Plasmodium is called:

5. Characters transmitted from parents to offspring are present in: