Disclaimer: The given NBSE Class 9 Social Science 2019 question paper has been sourced from NBSE

1.Choose the correct answer from the given alternatives:

(a) Which country dropped the atom bombs on Hiroshima and Nagasaki? (1)

(c) The highest peak in the world, the Mount Everest, is located in which range of the Himalayas? (1)

(d) Where is the Corbett National Park located? (1)

(f) Which of the following country is a typical example of Constitutional Monarchy? (1)

(h) When was the Planning Commission established? (1)

(i) The most important component of human resource development is (1)

8. Which Fundamental Right is called as the heart and soul of the Indian Constitution? (1)

11. Who was the first Naga lady Indian Ambassador? (1)

12. Mention the two aims of the Non-Cooperation Movement. (2)

13. Differentiate between tributary and distributary.(2)

17. Who was the first Christian missionary to the Nagas and when did he came to Nagaland? (1+1=2)

18. Describe the nature of the October Revolution. (4)

19. a. Explain how the Nazis were able to make Nazism a mass movement in Germany. (4)
Or
b. When was the Muslim League formed? Mention the main aims of the League. (1+3=4)

20. a. Write a brief note on the thorn forests and scrubs. (4)
Or
b. Mention any four methods which can be used to conserve wildlife.

22. a. What is population? Briefly explain three major factors that determine population change. (1+3=4)
Or
b. When was the National Population Policy implemented? Mention its objectives.

23. On the given political map of India, four features A, B, C, D have been indicated. Identify these features with the help of information mentioned below and write their correct names against their letters. (4) 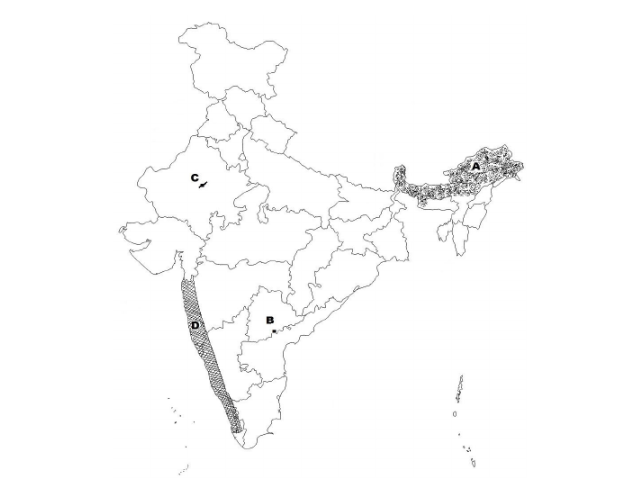 (a) Describe the legacy of the French Revolution. (6)
(b) Give an estimate of Gandhiji’s role in India’s struggle for freedom. (6)
(c) Write the characteristic features of hot weather season. (6)
(d) Mention any six functions of the Indian Parliament. (6)
(e) Explain any three poverty removal methods started by the government. (6)