Disclaimer: The given NBSE Class 10 Science 2021 question paper has been sourced from NBSE

N.B: Check that all pages of the question paper are complete as indicated on the top left side.

(b) Which among the following is the most reactive metal?  (1)

(d) The atomic number of an element is a more fundamental property than its atomic mass, as shown by  (1)

(e) The hormone that regulates blood sugar levels is (1)

(f) Characters transmitted from parents to offspring are present in (1)

Answer the following questions in one word or one sentence:

5. What will be the ratio of F2 progeny, if Fi tall plants reproduce by self-pollination? (1)

6. Name any two devices in which electric motors are used. (1)

Answer the following questions in about 20-30 words:

9. A person has difficulty reading newspapers. What could be the defect the person has? How can it be corrected? (1+1=2)

Answer the following questions in about 40-60 words:

14. Write any three differences between metals and non-metals based on their physical properties (3)

15. Explain the cleansing action of soap and draw the formation of a micelle (2+1=3)

Alternate question for the visually impaired students:
Differentiate between soaps and detergents. What causes the hardness of water? (2+1=3)

16. State the three events that occur during the process of photosynthesis. (3)

17. Why is it important for us to have iodised salt in our diet? Iodine is necessary for the synthesis of which hormone in the human body? Write one symptom caused due to lack of iodine in the diet. (1+1+1=3)

19. a. An object 5 cm in length is placed at a distance of 20 cm in front of a convex mirror with a radius of curvature of 30 cm. Find the position of the image, its nature, and its size (3)
Or
b. A 2 cm tall object is placed perpendicular to the principal axis of a convex lens with a focal length of 10 cm. The distance between the object and the lens is 15 cm. Find the nature, position, and size of the image. Also, find its magnification.

21. a. An electric lamp, whose resistance is 200 and a conductor of 402 resistance is connected to a 6V battery in the given figure. 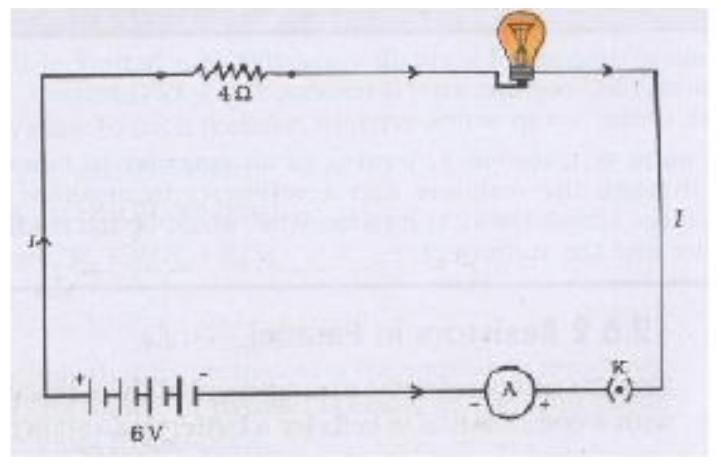 b. An electric bulb is connected to the 220V mains. The current is 0.50 A. What is the power of the bulb? If the bulb operates for 8 hours per day, what will be the cost of the energy to operate it for 30 days at Rs 300 per kWh?

Answer the following questions in about 70-100 words:

Alternate question for the visually impaired students:
(i) What is the function of carbohydrates in plants? How is it stored, if it is not used immediately?
(ii) In what form is food stored in our bodies?
(iii) What is the green pigment found in chloroplasts?
(iv) Name a plant that takes CO2 at night and acts on it during the day. (2+1+1+1=5)

24. a Name any two sexually transmitted diseases Explain four different methods of contraception (1+4=5)
Or
b. Explain asexual reproduction by fission and vegetative propagation with one example each (2 1/2+2 1/2=5)

Or
b. Draw a ray diagram to show the image formation by a convex mirror, when an object is placed between infinity and the pole P of the mirror. Write any three uses of a convex mirror.