Disclaimer: The given NBSE Class 10 Social Science 2022 question paper has been sourced from NBSE

i) Approximately 15 minutes is allotted to read the question paper and revise the answers.
ii) The question paper consists of 25 questions. All questions are compulsory.
ii) Internal & general choices have been provided in some questions.
iv) Marks allocated to every question are indicated against it

N.B: Check to ensure that all pages of the question paper are completed as indicated on the top left side.

(b) Which was the first Satyagraha launched by Gandhiji in India? (1)

(c) The most important fibre crop in India is (1)

(d) Which of the following industries belongs to the category of heavy industries? (1)

(e) In which of the following modes of transport does India have one of the largest networks? (1)

(g) Which factor is often found missing from a non-democratic government? (1)

(i) Transparency
(ii) Efficiency
(iii) Effectiveness
(iv) None of these

(h) Which among the following is associated with challenges facing Indian democracy? (1)

(i) World Consumer Rights Day is observed on (1)

(j) The highest mountain peak of Nagaland is (1)

2. Who started the first freedom movement in Italy? (1)

4. Which crops are known as beverage crops? (1)

11. When was the first transport service in Nagaland inaugurated?(1)

12.a. What was the significance of the Lahore Session of the Congress held in December 1929? (2)
Or
b. Write any two principles of Satyagraha.

13. When was the Simon Commission appointed? Why were the Indians against it? (1+1=2)

15.a. What is the meaning of a patriarchal society? (2)
Or
b. Democracy is the better form of government. Give two reasons in support of the statement.

16. List any two duties of an active and participatory citizen. (2)

17. Name any four rivers that flow into the Brahmaputra from Nagaland. (2)

18. a. Mention any four proposals of the Congress of Vienna. 1815. (4)
Or
b. What actions did France take to consolidate her position in Indochina?

19. a. What is soil erosion? Briefly explain the two types of soil erosion. (1+3=4)
Or
b. ‘Bio-gas is considered as an ideal domestic fuel”. Give four reasons in support of the statement. (4)

21. a. State four ways in which good health contributes to economic development. (4)
Or
b. Mention four key factors of education behind human development.

22. a. Distinguishbetween organised and unorganised sectors of the Indian economy. (4)
Or
b. Explain any four duties of a consumer while purchasing the goods. 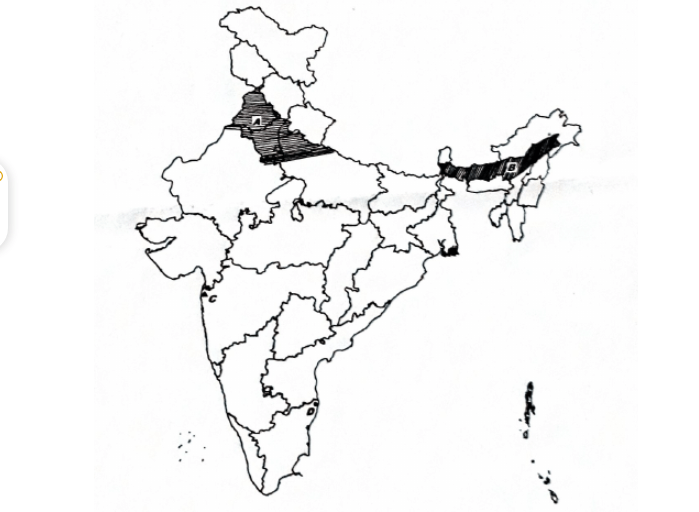 Note: The following questions are for visually impaired candidates only in lieu of Q 23.

i) Give one example of non-metallic minerals. (1)
ii) Where is the largest solar power plant located in India? (1)
iii) Which type of farming is also known as ‘slash and burn”? (1)
iv) Where is the Netaji Subhash Chandra Bose International Airport located? (1)

(a) Describe the events which led to the final exit of the French from Indochina. (6)
(b) Explain the causes of the Great Depression. (6)
(c) Explain any six functions of political parties in a democracy. (6)
(d) ‘Caste can take various forms in politics’. Give six reasons in support of the statement. (6)
(e) Describe the functioning of Self-Help Groups (SHGs) in India. (6)
(f) ‘The tertiary sector is becoming the most important sector in India’.

Give reasons in support of the statement. (6)

(a) Write a note on any six food crops of Nagaland.  (6)
(b) “Naga Bamboo works are popular all over the world”. Substantiate your answer with six points.  (6)
(c) Give an account of the geographical features of Nagaland.  (6)