You will learn about control and coordination in living organisms in Chapter 7 of Science Class 10 (NCERT, NBSE, SEBA, TBSE etc.). You’ll learn about the various movements that take place as well as the systems and structures that make them possible. Along with studying human anatomy, tissues, the brain, and other organs, you’ll learn about the characteristics of living things and how they work. Get here the questions, answers, textbook solutions, PDF, MCQs of this chapter.

1. What is the difference between reflex action and walking?

Answer: A reflex action is a rapid, automatic response to a stimulus. It does not involve any thinking. For example, we close our eyes immediately when the bright light is focused. Walking, on the other hand, is a voluntary action. It is under our conscious control.

2. What happens at the synapse between two neurons?

Answer: A very small gap that occurs between the last portion of the axon of one neuron and the dendron of the other neuron is known as a synapse. It acts as a one-way valve to transmit impulses in one direction only. This unidirectional transfer of impulses occurs as the chemicals are produced in only one side of the neuron i.e., the axon’s side. From the axon, the impulses travel across the synapse to the dendron of the other neuron. 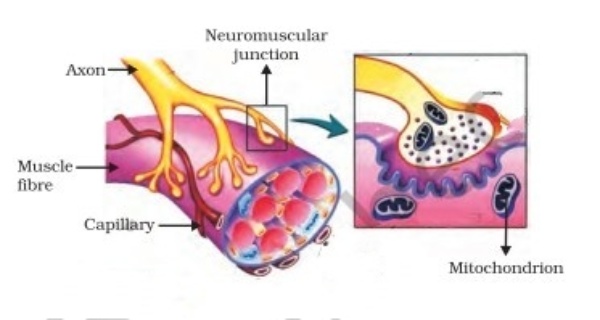 3. Which part of the brain maintains posture and equilibrium of the body?

Answer: Cerebellum, a part of the hindbrain is responsible for maintaining posture and equilibrium of the body.

4. How do we detect the smell of an agarbatti (incense stick)?

5. What is the role of the brain in reflex action?

Answer: Reflex actions are sudden responses, which do not involve any thinking. For example, when we touch a hot object, we withdraw our hand immediately without thinking as thinking may take time which would be enough to get us burnt. The sensory nerves that detect the heat are connected to the nerves that move the muscles of the hand. Such a connection of detecting the signal from the nerves (input) and responding to it quickly (output) is called a reflex arc. The reflex arcs —connections present between the input and output nerves — meet in a bundle in the spinal cord. Reflex arcs are formed in the spinal cord and the information (input) reaches the brain. The brain is only aware of the signal and the response that has taken place. However, the brain has no role to play in the creation of the response. 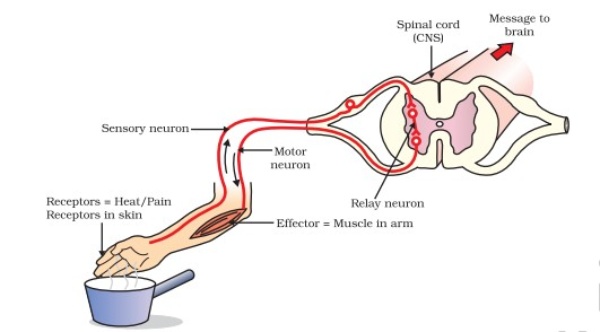 1. What are plant hormones?

Answer: Plant hormones or phytohormones are naturally-occurring organic substances. These are synthesized in one part of the plant body (in minute quantities) and are translocated to other parts when required. The five major types of phytohormones are auxins, gibberellins, cytokinins, abscisic acid, and ethylene.

Answer: The movement of leaves of the sensitive plant, Mimosa pudica or ‘touch me not”, occurs in response to touch or contact stimuli. This movement is independent of growth. The movement of shoot towards light is known as phototropism. This type of movement is directional and is growth dependent.

3. Give an example of a plant hormone that promotes growth.

Answer: One example of a plant hormone that promotes growth is auxin.

4. How do auxins promote the growth of a tendril around a support?

Answer: Auxins are produced at the shoot tip and stimulate cell growth. When a tendril comes into contact with a support, auxins stimulate faster growth of cells on the opposite side of the tendril, causing it to coil around the support. This results in the tendril resembling a watch spring.

5. Design an experiment to demonstrate hydrotropism.

Answer: To demonstrate hydrotropism, you can try the following experiment:

Observation: The roots of the germinating seeds should grow towards beaker A, demonstrating the phenomenon of hydrotropism.

1. How does chemical coordination take place in animals?

2. Why is the use of iodised salt advisable?

3. How does our body respond when adrenaline is secreted into the blood?

Answer: When adrenaline is released into the bloodstream, it can stimulate the body’s responses to stress or emergencies. This can include an increase in heart rate, breathing rate, and blood pressure. These responses help provide more oxygen to the muscles and prepare the body for physical action.

4. Why are some patients of diabetes treated by giving injections of insulin?

1. Which of the following is a plant hormone?

2. The gap between two neurons is called a

Answer: (b) The gap between two neurons is called a synapse.

3. The brain is responsible for

Answer: (d) The brain is responsible for thinking, regulating the heart beat, and balancing the body.

4. What is the function of receptors in our body? Think of situations where receptors do not work properly. What problems are likely to arise?

Answer: Receptors are sensory structures (organs/tissues or cells) present all over the body. Receptors can be grouped (e.g. in the eye or ear) or scattered (e.g. in the skin). The functions of receptors include sensing external stimuli such as heat or pain, and triggering an impulse in the sensory neuron which sends a message to the spinal cord. When receptors are damaged, they may not be able to perceive external stimuli, leading to problems. For example, if a person has damaged receptors in their hands, they may not feel heat or pain if they accidentally touch a hot object, resulting in burns.

5. Draw the structure of a neuron and explain its function.

Answer: Neurons are the functional units of the nervous system. The three main parts of a neuron are the axon, dendrite, and cell body. The axon conducts messages away from the cell body, the dendrite receives information from the axon of another cell and conducts the messages towards the cell body, and the cell body contains the nucleus, mitochondria, and other organelles and is responsible for the neuron’s metabolic processes. 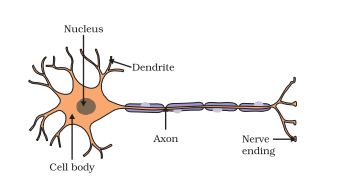 6. How does phototropism occur in plants?

Answer: Phototropism is the movement of a plant in response to light. It occurs when light receptors in the plant detect light and trigger the production of hormones that cause cells on the side of the plant away from the light to elongate, causing the plant to bend towards the light.

7. Which signals will get disrupted in case of a spinal cord injury?

8. How does chemical coordination occur in plants?

Answer: In plants, control and coordination occur through the use of plant hormones, also known as phytohormones. These hormones are produced in one part of the plant body and are translocated to other parts when needed. The five main types of phytohormones are auxins, gibberellins, cytokinins, abscisic acid, and ethylene. These hormones either promote growth (such as auxins, gibberellins, cytokinins, and ethylene) or inhibit growth (such as abscisic acid).

9. What is the need for a system of control and coordination in an organism?

Answer: Coordination is the maintenance of body functions in response to changes in the body by various integrated body systems working together. All movements in response to stimuli are carefully coordinated and controlled. In animals, this control and coordination is provided by the nervous and muscular systems. The nervous system sends messages to and from the brain, and the spinal cord plays a key role in the relay of these messages. Without a system of control and coordination, the body would not function properly. For example, if we accidentally touch a hot object, we immediately withdraw our hand. Without nerve transmission, we would not be able to withdraw our hand and could get burnt.

10. Tendrils encircle or coil around the object in contact with it. Elaborate.

11. How does chemical coordination occur in plants? Explain with the help of three examples.

12: ‘Brain and spinal cord are two vital organs of our body.’ How is our body designed to protect them?

Answer: Brain and spinal cord are the parts of central nervous system and are vital for the functioning of the body. To protect these organs, the brain is located inside the bony box called the cranium, which provides a hard protective cover. Additionally, cerebrospinal fluid present in the cranium acts as a shock absorber, helping to protect the brain from injury. The spinal cord is also protected by being housed inside the vertebral column, with the backbone serving as a protective covering.

13: State how concentration of auxin stimulates the cells to grow longer on the side of the shoot which is away from light?

Answer: When plants detect light, they produce a hormone called auxin at the shoot tip, which helps the cells to grow longer. When light is coming from one direction, auxin diffuses towards the shaded side of the plant. The increased concentration of auxin stimulates the cells on this side of the shoot to grow longer, causing the plant to bend in the direction away from the light.

14: Which is the main thinking part of the brain? State how it functions.

Answer: The main thinking part of the brain is the forebrain or cerebrum. It is responsible for hearing, sight, and smell, as well as controlling voluntary actions such as feeling thirst and hunger. The cerebrum also helps to process and relate incoming information.

15: How are involuntary actions and reflex actions different from each other?

Answer: Involuntary actions cannot be consciously controlled. For example, we cannot consciously control the movement of food in the alimentary canal. These actions are however directly under the control of the brain. On the other hand, reflex actions such as closing of eyes immediately when bright light is focused show a sudden response and do not involve any thinking. This means that unlike involuntary actions, reflex actions are not under the control of the brain. They are controlled by the spinal cord and are a response to a stimulus. Reflex actions do not involve the brain in the decision-making process, unlike involuntary actions, which are controlled by the brain.

16: Compare and contrast nervous and hormonal mechanisms for control and coordination in animals.

17: What is the difference between the manner in which movement takes place in a sensitive plant and the movement in our legs?

Answer: The difference between movement in sensitive plants and our legs are:

1. The growth of tendril in pea plants is due to:

Answer: (d) Rapid Cell Divisions in Tendrills cells in contact with the Support.

2. The growth of pollen tubes towards ovules is due to:

3. Posture and balance of the body is controlled by:

4. Choose the incorrect statement about insulin:

Answer: (b) It regulates growth and development of the body

5. In a synapse, chemical signal is transmitted from:

Answer: (d) axonal end of one neuron to dendritic end of another neuron