Disclaimer: The given NBSE Class 10 Social Science 2019 question paper has been sourced from NBSE

(i) western industrial powers.
(ii) all the member-nations of these two banks
(iii) the Asian-African bloc
(iv) a majority vote by all the nations

(c) Which of the following reasons makes water a renewable and rechargeable resource? (1)

(g) Which of the following challenge is being faced by most democracies of the world? (1)

10. Why is the tertiary sector also called the service sector? (1)

11. What are the two types of cultivation practised by the people of Nagaland? (1)

12. Mention any two factors that led to the rise of nation-states. (2)

13. When was the Simon Commission appointed? Why were the Indians against it? (1+1=2)

15. ‘Democracy is the better form of government’. Give two reasons in support of the statement. (2)

18.a. What steps did France take to consolidate her position in Indo-China? (4)
Or
b. When did the French interest in Indo-China begin? Give three reasons why the French considered it necessary to colonise Indochina. (1+3=4)

20. Describe the role of the information technology industry in modern India. (4)

21.a. ‘Caste can take various forms in politics’. Give any four reasons in support of the statement. (4)
Or
b. Explain the political expression of communalism.

22.a. Mention any four ways on how good health contributes to economic development. (4)
Or
(b) Mention the reasons for the decline in the sex ratio in India.

23. On the given political map of India, four features A, B, C, D have been indicated. Identify these features with the help of the information mentioned below and write their correct names against their given letters. (4) 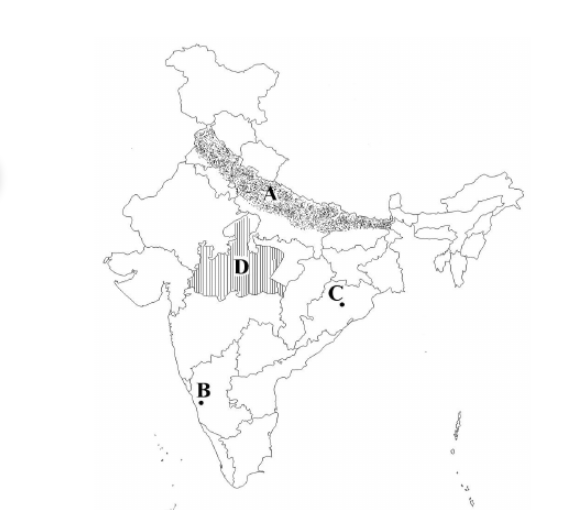 (a) Describe the events that led to ‘Dual Monarchy’ in Hungary. What were its consequences? (3+3=6)
(b) Describe the contribution of Subhash Chandra Bose to the freedom struggle of India. (6)
(c) Explain any six features of federalism. (6)
(d) Explain the role of an ordinary citizen in a democracy. (6)
(e) Who is a consumer? Explain any five forms of consumer exploitation. (1+5=6)

25.a. Give an account of the flora and fauna of Nagaland. (6)
Or
b. Explain any three cottage industries in Nagaland.