Disclaimer: The given NBSE Class 9 Social Science 2017 question paper has been sourced from NBSE

i) Approximately 15 minutes are allotted to read the question paper and revise the answers.
ii) The question paper consists of 25 questions. All questions are compulsory.
Iii) Internal choice has been provided in some questions.
iv) The allocated to each question are indicated against it.

N.B.: Check that all pages of the question paper are complete, as indicated on the top left side.

(a) What is the most important component of human resource development? (1)

(c) Which State has the largest number of members in the Vidhan Sabha? (1)

(e) The Dandi March is associated with (1)

(g) Serfdom in Russia had been abolished in the year (1)

(h) In which of the following State is the Sunderbans bioreserve located? (1)

(i) Which of the following country is a typical example of a constitutional monarchy?  (1)

(j) Who was popularly referred to as the father of the democratic tradition in Nagaland? (1)

5. When was the Indian Constitution enforced? (1)

9. Which law turned the clergy into paid servants of the church? (1)

12. Mention any two programmes that the NPP plans to implement. (2)

13.Differentiate between Ballot papers and EVM. (2)

14. Mention two factors which contributed to the growth of nationalism in India. (2)

16. Write any two arguments against democracy. (2)

17. Write the famous epitaph inscribed on stone panels at the bottom of the Kohima War Cemetery. (2)

19.a. Explain how an ordinary bill becomes a law.
Or (4)
b. Mention any four powers of the Indian Prime Minister.

20. a. Explain any two distinct parallel ranges of the Great Himalayan range.
Or (4)
b. Mention any four characteristic features of the hot weather season in India.

22. a. Describe the crisis in Germany after the First World War.
Or (4)
b. Explain any two beliefs of the Nazis under Hitler.

23. On the given political map of India, four features A, B, C, D have been indicated. Identify these features with the help of information mentioned below and write their correct names against their letters. 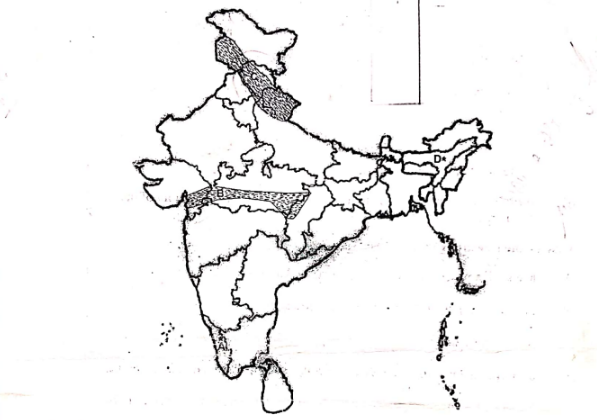