Disclaimer: The given NBSE Class 9 Social Science 2018 question paper has been sourced from NBSE

(a) The ‘Popular Sovereignty Theory’ was advocated by (1)

(d) Wayanad Wildlife Sanctuary is in (1)

(f) which of the following has superior power regarding money bills? (1)

(i) The food is distributed at subsidized prices through (1)

4. Why are conventional symbols so-called? (1)

11. Who was the first Naga to be appointed as Governor of an Indian state? (1)

12. In what way did the French Revolution mean different aims for the liberals and the extremists? (2)

16. Mention any two basic features essential for a democratic election. (6)

19. a. Mention any four factors that contributed to the birth of nationalism in India. (4)
Or
b. Give an estimate of Gandhiji’s role in India’s struggle for freedom.

20. a.Explain any two distinct parallel ranges of the Great Himalayan range. (4)
Or
b. Write any four characteristic features of cold weather season.

21. a. Explain any two salient features of the Indian Constitution. (4)
Or
b. Mention any four Objectives Resolution of the Constituent Assembly.

22. a. Explain any two main features of the Indian economy. (4)
Or
b. Economy and its development and occupational structure are closely related. Give reasons in support of the statement.

23. On the given political map of India, four features A, B, C, D have been indicated. Identify these features with the help of the information mentioned below and write their correct names against their letters. (4) 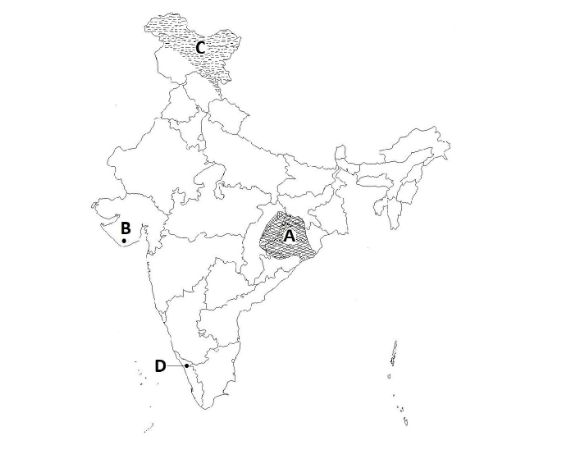 (a) Describe theReign of Terror and the role played by Robespierre in it. (6)
(b) Describe the legacy left by the Russian Revolution.  (6)
(c) Explain any six essential features of a democracy. (6)
(d) Mention any six fundamental duties of a citizen of India. (6)
(e) Define unemployment. Explain any two types of unemployment (1+5=6)

25. a. Give a brief account on the origin of the word ‘NAGA’. (6)
Or
b. Explain any four major factors that influenced the British government in the colonization of Nagaland.