You will learn more about the connection between electricity and magnetism and examine the various ways that electric current can create a magnetic field in Chapter 13 of Class 10 Science (NCERT, NBSE, SEBA, TBSE etc.), “Magnetic Effects of Electrical Current.” You will gain knowledge of Hans Christian Oersted and Michael Faraday’s groundbreaking research, two scientists who laid the groundwork for our knowledge of electromagnetism and its numerous practical applications. You will also learn about the heating effects of electric current, how current-carrying wires behave as magnets, Fleming’s left-hand rule, and the fundamentals of electric motors. Get here the questions, answers, textbook solutions, PDF, MCQs of this chapter.

1. Why does a compass needle get deflected when brought near a bar magnet?

Answer: The magnetic field exists around both a bar magnet and a magnetic compass needle. When they are brought close to one another, these magnetic fields interact, deflecting the needle. 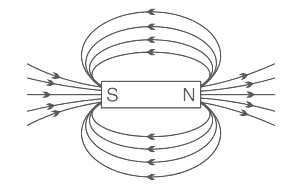 3. Why don’t two magnetic lines of force intersect each other?

Answer: It is discovered that no two field lines cross one another. If they did, the compass needle at the intersection would point in two different directions, which is not possible.

1. Consider a circular loop of wire lying in the plane of the table. Let the current pass through the loop clockwise. Apply the right-hand rule to find out the direction of the magnetic field inside and outside the loop.

2. The magnetic field in a given region is uniform. Draw a diagram to represent it.

Answer: The uniform magnetic field is represented by parallel, equidistant lines of equal length as shown in Figure. 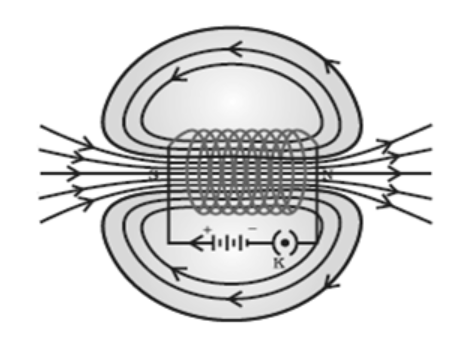 Answer: (d) is the same at all points.

1. Which of the following property of a proton can change while it moves freely in a magnetic field? (There may be more than one correct)

2. In Activity 13.7, how do we think the displacement of rod AB will be affected if 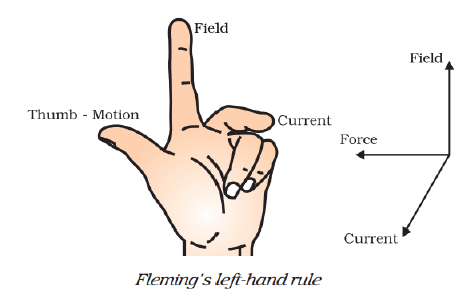 2. What is the principle of an electric motor?

Answer: An electric motor’s operation is based on the magnetic pull of current. When positioned in a magnetic field, a current-carrying loop experiences a force and rotates. The Fleming left-hand rule specifies which way the loop will rotate.

3. What is the role of the split ring in an electric motor?

Answer: The split ring serves as a commutator in an electric motor. After every half-rotation of the coil, the commutator changes the direction of the current flowing through the coil. The coil keeps spinning in the same direction as a result of this current reversal.

1. Explain different ways to induce current in a coil.

Answer: The following list includes various methods for creating current in a coil:

1. State the principle of an electric generator.

Answer: The electromagnetic induction theory serves as the foundation for an electric generator. An induced voltage develops between the coil’s ends when a rectangular coil is rotated in a consistent magnetic field.

2. Name some sources of direct current.

Answer: Some sources of direct current are a cell, a battery and a D.C. generator.

A rectangular coil of copper wires is rotated in a magnetic field. The direction of the induced current changes once in each

2. An electric oven of 2 kW power rating is operated in a domestic electric circuit (220 V) that has a current rating of 5 A. What result do you expect? Explain.

Due to the oven’s 9 A current draw, which exceeds the domestic electric circuit’s 5 A current rating, the circuit will be damaged due to overloading and overheating.

3. What precaution should be taken to avoid the overloading of domestic electric circuits?

Answer: The following precautions should be taken to prevent domestic circuits from becoming overloaded:

1. Which of the following correctly describes the magnetic field near a long straight wire?

Answer: (d) The field consists of concentric circles centred on the wire.

2. The phenomenon of electromagnetic induction is (a) the process of charging a body.

Answer: (c) producing induced current in a coil due to relative motion between a magnet and the coil.

3. The device used for producing electric current is called a

4. The essential difference between an AC generator and a DC generator is

5. At the time of short circuit, the current in the circuit

6. State whether the following statements are true or false.

Answer: (a) An electric motor converts mechanical energy into electrical energy. (False)
(b) An electric generator works on the principle of electromagnetic induction. (True)
(c) The field at the centre of a long circular coil carrying current will be parallel straight lines. (True)
(d) A wire with a green insulation is usually the live wire of an electric supply. (False)

Answer: The following are three ways to create a magnetic field:

8. How does a solenoid behave like a magnet? Can you determine the north and south poles of a current–carrying solenoid with the help of a bar magnet? Explain

The current-carrying solenoid’s terminal, which pulls a bar magnet’s north pole but repels its south pole, is acting like the south magnetic pole. The other end of a bar magnet behaves like the north magnetic pole because it repels the north pole but attracts the south pole. It’s because opposite poles attract one another while like poles repel one another.

9. When is the force experienced by a current–carrying conductor placed in a magnetic field largest?

10. Give the factors on which, magnetic field produced by a current carrying solenoid depends.

Answer: The following variables affect how strong a magnetic field created by a current-carrying solenoid will be:

11. (a) A compass needle gets deflected when brought near a current carrying conductor. Why?
(b) What happens to the deflection of the needle when the current in the conductor is increased?

(b) The needle of the compass will deflect more than it did earlier when the wire’s current is increased.

12. Explain why a fuse should be joined with the live wire and not with the neutral wire to a domestic circuit.

Answer: The power is delivered to the home via a live wire from the supplier and is returned via a neutral wire in a domestic circuit. As a result, the fuse needs to be connected to the live wire in order to prevent damage to the appliance from overloading.

An electric motor is a machine that makes use of a current-carrying conductor and magnetic field.

14. Can a freely suspended current carrying solenoid stay in any direction? What will happen when the direction of current in the solenoid is reversed?

Answer: No, because it behaves like a bar magnet, the current-carrying solenoid falls freely and stays in the North-South direction. A solenoid’s direction of current flow also changes when the current flow is reversed through it.

15. What does the direction of thumb indicate in the right hand thumb rule? In what way this rule is different from Fleming’s left hand rule?

16. Imagine that you are sitting in a chamber with your back to one wall. An electron beam, moving horizontally from back wall towards the front wall, is deflected by a strong magnetic field to your right side. What is the direction of magnetic field?

We now know two things: The force is directed to our right side, and the direction of the current is from the front towards us.

Answer: Electric Motor: An electric motor is a device that transforms electrical energy into mechanical energy. It is utilised in machines like fans.

Principles: Electric motors operate under the principle of the force exerted by a conductor carrying current in a magnetic field. The two opposing forces are equal and complementary. They cause rotational motion because they operate along distinct lines.

How an electric motor operates: The coil ABCD is horizontal when current begins to flow. The armature coil’s current flows in two different directions: from A to B in arm AB and from C to D in arm CD. The Fleming left hand law can be used to determine the direction of the force acting on the coil.

The current in the coil is stopped when the coil is vertical because the brushes X and Y would come into contact with the commutator’s centre. Even though the current is cut off, momentum causes the coil to return to its horizontal position. The polarity of the commutator also changes after half rotation because Q now contacts brush X and P contacts brush Y. As a result, the force now acts downwardly on arm AB and upwardly on arm CD, and once more a couple of forces are created that cause the coil to rotate in a clockwise direction. The coil rotates as this procedure is carried out repeatedly until current is flowing through it. 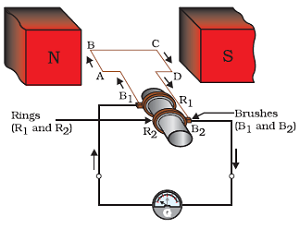 18. Name some devices in which electric motors are used.

20. Two circular coils A and B are placed closed to each other. If the current in the coil A is changed, will some current be induced in the coil B? Give reason.

Answer: Yes, the coil B will experience some current induction. A small amount of current is induced in coil B when the current in coil A is changed. The magnetic field lines connecting coils A and B change as a result of a change in current in coil A. In coil B, this creates induced current.

21. State the rule to determine the direction of a

22. Explain the underlying principle and working of an electric generator by drawing a labelled diagram. What is the function of brushes?

Answer: Principle: The electromagnetic induction theory serves as the foundation for the electric generator. A coil’s number of magnetic field lines changes when it is rotated in relation to a magnetic field. This causes a current to be induced in the coil, and Fleming’s right hand rule can be used to determine its direction. 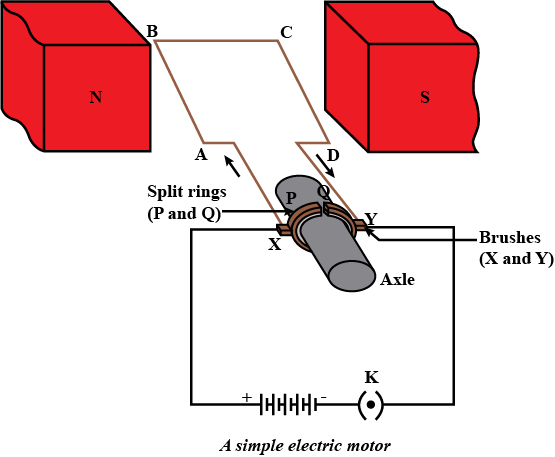 Working: The magnetic lines of force are cut through when the armature coil ABCD rotates in a magnetic field created by the permanent magnets.

An induced electromagnetic force is generated in the associated magnetic field as a result of the armature coil’s rotation. With the aid of Fleming’s right hand rule, it is possible to determine the direction of this induced electromotive force or current.

23. When does an electric short circuit occur?

Answer: When live and neutral wire come into direct contact with one another in a domestic circuit without any resistance, a short circuit results. When the circuit’s resistance drops to zero, an excessive amount of current begins to flow through it.

24. What is the function of an earth wire? Why is it necessary to earth metallic appliances?

Answer: A safety measure known as earth wire offers a low resistance conducting path for the current. When the live wire comes into direct contact with an appliance’s metallic cover due to excessive heat or wear and tear, an electric shock may result from touching the metal. The metallic component is connected to the earth through a three-pin plug to prevent shock, causing current to flow to the earth in the event of a short circuit.

Metallic appliances must be earthed in order to ensure that, in the event of a current leak in the metallic cover, the potential of the appliance equals that of the earth. The earth has no potential at all. The person using the appliance won’t receive an electric shock as a result.

1. The strength of the magnetic field of a solenoid does not depend upon:

Answer: (c) core of the coil

2. The magnetic field around a current carrying conductor is:

Answer: (b) Inversely proportional to r

3. Inside a current carrying solenoid the magnetic lines of force are:

Answer: (b) along the axis of the solenoid and parallel to each other

Answer: (b) a magnetic field

5. The direction of induced potential difference is given by: